The History of the papyrus scroll.The ancient scroll of papyrus made their way across Egypt to Greece and Europe. 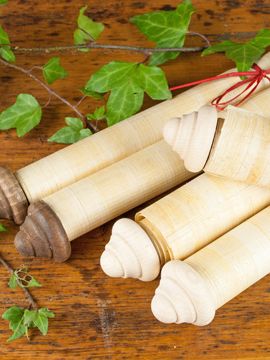 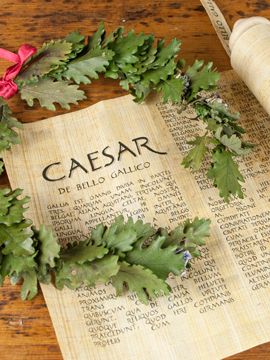 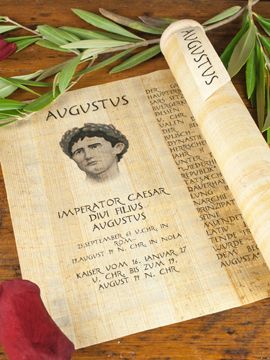 The "book" from Papyrus came in roles on the Roman markets, usually made from twenty Papyrus leaves (kollemata). Preferably the inner side of the scroll (the recto side) was used for writing, as the structure of the papyrus strip was horizontal and therefore easier for writing with a calamus or the feather, the penna scriptoria. Also browse the various scrolls with text about Nero or the eruption of Mount Vesuvius, the entertaining knowledge about love provided by Ovid. We also have classic literature like Caesar’s De bello gallico on papyrus

Papyrus roll during the Middle Ages

Into the Middle Ages, scrolls or volume roles – their alternative name – were used especially for the liturgy and also for the production and preservation of land deeds. Hence, rolls represent tradition and reliability, even sanctity, which explains the use of rolls up today for the production of the Torah in Judaism.

We provide everything in our online shop to allow the medium of the papyrus roll to continue to stay alive and give you access to making use of it. Our scrolls come plain or with one or two wooden bars both at the beginning and at the end of the roll. Thus, the writing surface is stretched and can be easier used for writing or reading, while the bars are also useful for keeping the roll in one’s hand while reading.

For the manufacturing of the rolls, we use exclusively high-quality handmade papyrus from Egypt. The scrolls with wooden bars can be individually marked or written upon. In addition, the papyri come in various sizes, even up to the huge sheet of 2 x 1m! Why not motivate students who read History or Latin by using Caesar’s or Ovid’s texts printed on papyrus rather than paper. In order to allow the scrolls to be properly stored, we offer a hand braided willow shelve made according to ancient designs.

Scrolls - the beginnings of the ancient book

Who today collects books, has bookshelves with books standing on them, while antique libraries kept literature written on rolls. Reading meant scrolling and rolling. Most civilizations made use of rolls rather than codices. And yet, codices made their ways and mostly replaced rolls, and at the latest with book printing, almost solely books as codices survived.

Scrolls, however, also had big advantages. They were ideal for liturgical readings, highlight sections rather than an entire work and focus one’s eyes on particular passages.