Many Romans lived in elegant villas. Look out for everyday objects and useful objects that decorated such villas and will adorn your home and your garden. 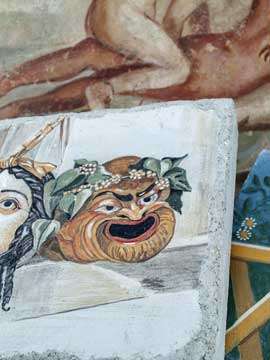 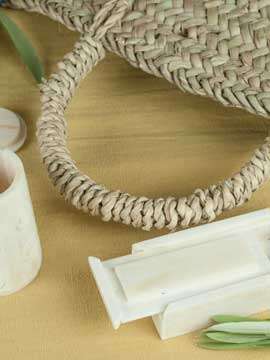 Carrying basket made of palm fronds by Bar Kochba Bowls for incense and a variety of dried plants and herbs were essential elements of a Roman kitchen and medicine. Our wooden and ceramic bowls are all made according to archaeological finds - collar trays, containers with lion heads, mortars of herbs and spices and other Roman kitchen products you will discover on the following pages. The tableware often looks simply beautiful, and is quite different from the industrial design of modernity. It is restrained in decoration, but above all it is very practical. To light the fire, the Romans used a flint. With out boxes, made from wood or the baskets from willow, you will recreate the Roman kitchen and your dining experience.

Wealthy Romans lived in upper class country house style villas. According to Pliny the Elder, there were two kinds of villas: the villa urbana, which was a country seat that could easily be reached from Rome (or another city) for a night or two, and the Villa rustica, the farm-house estate permanently occupied by the servants who had charge generally of the estate.
A villa included an open courtyard called atrium. In the middle there was a basin that collected the rain water and kept the room cool, the so-called impluvium. All around were the bedrooms (cubicula) and the dining room(triclinium). Half lying, the Romans ate there very comfortably. A passage led to a courtyard with garden (peristyle). Around it was a portico. The walls were usually painted and te floor often decorated with mosaics. Wonderful examples can be seen at Pompeii.

Romans also kept pets, for example dogs as guard animals. In the well-known inscription, which was found in Pompeii, we read: cave canem – beware of the dog!

Not all Romans were wealthy and had their own villa! Most Romans lived in rented accomodation, in houses which were called insulae. These Roman buildings were multi-story blocks with many small apartments. The construction was often miserable, and it even happened that houses collapsed! Often, they burned down when the residents cooked on their small furnaces. The fire bridgade - which already existed in Roman times – were pretty busy. On the ground floor people small shops offered food or other products to the people walking through the streets.

Generally, there was running water on the ground floor. In the upper floors, you had to take it up using buckets. In some buildings glass windows existed, but usually the window was no more than a grid that did not protect against the cold in the winter.

was sometimes only seasonally occupied. During the Roman Empire there was, for example, a concentration of Imperial villas near the Bay of Naples, especially on the Isle of Capri, at Monte Circeo on the coast and at Antium. Wealthy Romans escaped the summer heat in the hills round Rome, especially around Frascati. Cicero is said to have possessed no fewer than seven villas, the oldest of which was near Arpinum, which he inherited. Pliny the Younger had three or four, of which the example near Laurentium is the best known from his descriptions.

There were a great variety of kinds of villas, not all of them lavishly decorated with mosaic floors and frescoes. In the provinces, any country house with some decorative features in the Roman style may be called a "villa". Some were pleasure houses such as those— like Hadrian’s Villa at Tivoli — that were sited in the cool hills within easy reach of Rome or— like the Villa of the Papyri at Herculaneum— on picturesque sites overlooking the Bay of Naples. Some villas were more like the country houses of England, the visible seat of power of a local magnate, such as the famous palace rediscovered at Fishbourne in Sussex.

Villa urbana – the place of the wealthy Romans

Since the 2nd century B.C., the villa urbana was the home of wealthy and influential Romans. This Roman dwellings were usually more spacious than town houses. The villas were often built on hills, overlooking the cities, and the landscape was part of the desigh of house and gardens. Architects planned both and from the villa’s windows one had the most amazing views on the gardens. Ponds, entire water landscapes and mythological sceneries were popular and looked like a theatre scene. There were trees and shrubs, arcades with wine, fountain and lakes.

The country houses also served as centres for entertaining guests. Rich Romans had their art collections and libraries there, and even theatrical performances were organized.

Usually, the Romans had only a few furniture in the rooms, which were mostly windowless because of the Italian heat. There we find beds, sofas for dinner, small tables and chests. Oil lamps or candles were used for lighting. They do not however spend more than a little light!