Cut out sheet Buddhist temple, handicraft template to paint in Handicraft pattern A house in Israel at the time of Jesus Cut out sheet Jewish synagogue to paint in 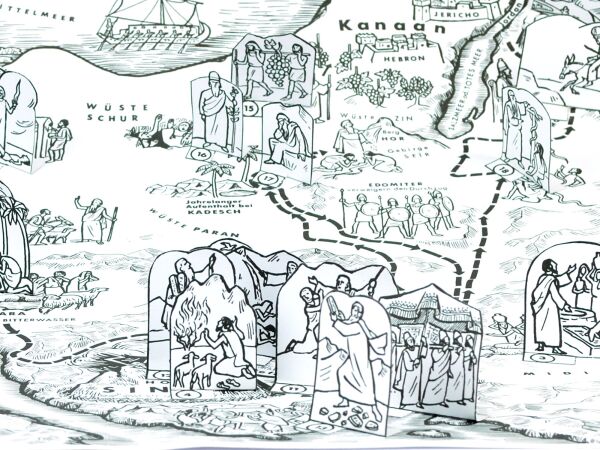 Cut out sheet monastery, handicraft template to paint in Cut out paper sheet Psalm 23, handicrafts pattern to colour in Cut out sheet Wartburg, handicrafts template to paint in

Own creation of coloring pictures

You can hardly assume that romans have given their children papyri to paint on 2000 years ago. Papyrus was a precious material which was not easy to manufacture and came a long way.

Rome was a world power and had widely ramified trade routes to all their colonies. Papyri came from Egypt which was by sea more than 2000 km away. The passage from Ostia (port of Rome) to Alexandria took them 10 days. The journey was dangerous and expensive; nevertheless many goods were transported this way. The passage on land was long; it ran along the coast of Egypt to the West via today?s Lybia with its roman cities Cyrene, Apollonia and Benghasi (were the highly treasured plant Sylphion grew). There were also cargos shipped and transported via the sea through the street of Messina to the port of home, Ostia.

The papyrus roll was material for writer and scholars whereas kids used wax boards. That was more economical as the engraved letters could be removed and the boards used once more.

Coloring pictures with funny motifs from the ancient roman times

The funny roman coloring pictures for kids from the current century are made from papyrus.
Modern means of transport make a lot possible. The production and continuous sale of papyrus for roman coloring pictures is a source of income some Egyptian families are very happy about.
Therefore we are very happy when kids use our choice of roman coloring pictures. On this page we are going to show you some roman gods and citizens which can be colored as funny motifs on the papyri.
Kids can choose the colors they like best. At the same time they get a picture of roman mythology and history while coloring the pictures which makes them curious about stories from a time which we still do not fully understand but which had a considerable impact on our own culture.

He was a powerful man and belonged to the supreme council of the Roman Empire. He determined politics with other senators and made laws. He had an enormous reputation.

Patricians belong to the long-established upper class of Rome. They were wealthy and separated themselves from the rest of the population. For a long time they determined politics, Gaius Julius Caesar was also a patrician. The noble patrician had many servants and slaves. Her lifestyle was notably different from that of a common woman.

At the beginning fights of gladiators had a religious background and were part of obsequies. There are hints of that on grave paintings of etruscan origin from the 6th century B.C. Later on the fights were held at games to demonstrate the dimension of the Roman Empire. The gladiators had to prove fighting spirit, courage, skill and the will to win. In different disciplines and differently armored they fought against each other. Often gladiator Retiarius fought against gladiator Murmillo who was one the strongest and best armed among the gladiators. Retiarius fought with a short dagger, trident and net and had to fight against Murmillo who was equipped with helmet and gladius. The population of Rome demanded games and the sovereigns of Rome gathered appreciation while offering the games.

The messenger of the gods (greek: Hermes) was the god of merchants and thieves, profit and wealth. He is pictured with caduceus, a winged helmet, winged shoes and wallet.

First ancestor of the romans, mother of Aeneas, known to everybody as goddess of love and grace. She wore her love spell in a belt around her body. Hera borrowed the belt to charm Zeus. As with many gods, her picture changed over time, she was also goddess of gardens and the evening star.

The beautiful coloring pictures romans are a meaningful and diversified activity for kids. You can paint on papyrus with all established crayons, water color and ink. The motifs of the coloring pictures look especially nice while using a tempera color set.

Coloring pictures from Papyrus | Great teaching material on the subject romans. You can buy it at a reasonable price in the www.Roman-Shop.com. Buy now!

Egypt is a country with a fascinating, well-preserved history. That this is so, we owe to the great artists who have produced this culture. They have left us writings and works of art of unparalleled beauty and variety. They were true masters in the use of colors, all of which had to be produced in-house.

Thus the color black, which was used to write the hieroglyphs, but also in the paintings on columns, rock walls, and temple walls, was made of soot, which was even scraped off by cooking-pots. Stones, such as malachite and lime, were turned into green and white. Lapislazuli supplied the famous, beautiful blue, ocher, which was found in desert areas. It was used for the production of red, brown and orange tones.

The colors of the Egyptian color scale are known by name: the word "Wadj" refers to the habitat water, which also includes green, since vegetation is possible only by water. Wadj is also today the Arabic word for a dry river, which leads to water at spring time.
"Kek" denotes the darkness, the dark colors blue and black.

Egypt owes its fertility to the annual recurring floods of the Nile.

The word "Kem" encompasses the shades of the earth, ie all brown tones, but also gray and black. "Descher" means the colors of the sand and its shades, which can be very different, also red, depending on the daylight.
"Hedj" is the brightness - silver and gold and the opposite of black.
The colors were symbolic in meaning and were used accordingly. Thus Osiris was painted green as a youth, but black as a dead god.

The coloring pictures of Egypt show the horus eye, Anubis, the ancient Egyptian god of the nativity, usually depicted as a lying, black dog or as a man with a jackal. His task was to embalm the dead, he led the soul to the "field of heavenly sacrifices." His judgment in the death court was of decisive importance.

Tutankhunun, the son of Akhenaten and his wife Nefertiti, also motifs of the coloring pictures Egypt, ruled the country only a few years from 1332 - 1323, he died no natural death. Its mosaic is probably the most famous and most glorious, which is always exhibited together with valuable burial objects in large museums of the world. Pure gold and lapis lazuli grace the beautiful face.
The mother goddess Isis and her son Horus are also part of the coloring pictures Egypt like the famous pharaoh Cleopatra, a descendant of Alexander the Great from the sex of the Ptolemies. Caesar, the Roman ruler, loved her, and brought her to Rome. Marcus Antonius was her lover, and with her, a year after his last lost battle, she chose to commit suicide.

Coloring pictures Egypt also show Nefertiti. It took a very special place in Egyptian history. The beauty of Mitanni, with her husband, Pharaoh Akhenaten, introduced the belief in a god, Aton, who was represented by the sun-disc. In honor of him, he built the city of Achetaton, which, after his death, was destroyed to the foundation walls. The priests regained their original influence and the Egyptian people returned to the old polytheism.

In a few occupations, children are sunk as deeply as when painting. Something very essential seems to trigger this activity in the soul of a child, for the degree of concentration, the forgetting of the environment and the exclusive attention to his work, which is created under his hands, astonishes and fascinates every observer.

Painting is conducive to the development of a child in many respects, as visual perception, writing development, fine motor skills and cognitive abilities are equally trained. Joy of your own creativity is awakened, the play with colors and the handling of painting tools like crayons, watercolors or felt-tip pens, is learned and practiced.

In all cultures and thousands of years ago people have created images. We are still amazed today by rock paintings whose origin and exact age we do not even know and wonder about the quality of the colors and the precision of the pictures.
The ability and enthusiasm to paint images, it is necessary to awaken and promote children in children, taking into account the different development stages.