Clothing of the Romans

All in all, Roman clothing was similar to the Greek.

The tunic was a piece of clothing for everyone. It was usually made up of two square woolen cloths which were connected at the shoulders and hung down to the knees. They were most commonly made out of uncolored wool and were therefore the color of oatmeal. - The tunic was held together at the waist with a belt. Those who were more well-to-do wore longer tunics.

The most famous piece of clothing for men was the toga, which was worn over the tunic. All freeborn were legally allowed to wear a toga. Usually, however, only men of the upper class – the “elected people” – wore a toga as a sign of an official mission: magistrates and senators wore them when they were carrying out their state obligations. But putting on such a toga was not an easy task - the material was folded and artfully draped over the shoulders! That is why they were often replaced with a cloak (pallium), but this was frowned upon in some circles. 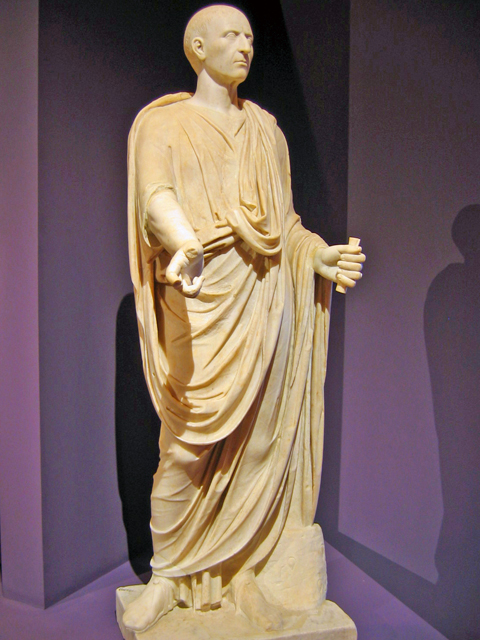 The piece of clothing that was more popular than the toga in the end was the simple tunic, which was worn by men as well as women: a simple shirt, usually of white wool or linen made up of two parts sewn together. They were worn day and night. If you wanted to relax at home, you loosened the belt. In winter, people would wear up to four tunics layered on top of one another!

A special kind of tunic for women was the stole: it was favored in particular by matrons from the upper class and was characterized by a purple border on the lower hem. Of course women wore something like underclothes under the tunic: an apron and chest band. Women of the common classes were not allowed to wear stoles and probably didn‘t have the money for such elaborate clothing.

In the imperial period, the tunic was replaced by a cloak called pallium for men and palla for women. The cloak, which was taken from the Greeks, was easy to throw over the shoulders and usually went down to the ankles. The most popular color was purple.

If the weather was bad, there was also a poncho (paenula) with a hood, made of a rough woolen material. It was a funnel-shaped all-weather cloak without sleeves. Even simple folk could afford it!

In a society like that of the Romans, in which social position was put on display with status symbols and external signs, the discrepancy between rich and poor manifested itself in the clothing and in particular in the cloak. This was done with outward splendor, opposition, attracting attention, or a purposefully unkempt appearance – just like today! 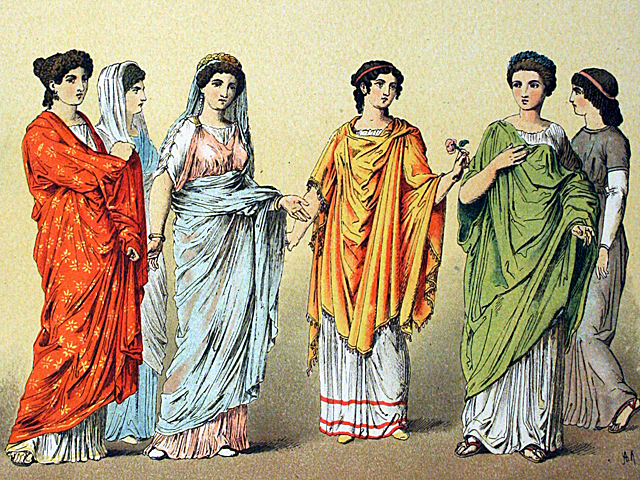 Plastic Free packaging For a long time now we have been working on making our packaging plastic free. Now that we have again found some environmentally friendly alternatives, almost 95% of

Roman Vinum – the Wine of the Romans In antiquity, wine was the only beverage recognized by all nations of the Mediterranean. As today, there was the separation into vinum album, white

Toys for Roman Children “The next time your parents slaughter a sheep, have them give you the knucklebones,” was an instruction for Roman children for getting the most popular gaming

Roman Writing Materials At first, Romans used wooden tablets around 20 centimeters wide and six to 15 centimeters long. The surfaces were whitened and they were written on with ink. These

Rome’s Libraries There had been private libraries in Rome since the 2nd century BC. Public libraries for Greek and Latin literature were only established during the early imperial period.

By selecting "Accept all", you give us permission to use the following services on our website: YouTube, Vimeo. You can change the settings at any time (fingerprint icon in the bottom left corner). For further details, please see Individual configuration and our Privacy notice.

The settings you specify here are stored in the "local storage" of your device. The settings will be remembered for the next time you visit our online shop. You can change these settings at any time (fingerprint icon in the bottom left corner).

To view Vimeo contents on this website, you need to consent to the transfer of data and storage of third-party cookies by Vimeo.. This allows us to improve your user experience and to make our website better and more interesting. Without your consent, no data will be transferred to Vimeo. However, you will also not be able to use the Vimdeo services on this website.

Would you like to see these contents? Activate the desired contents for one session only or allow the website to remember these settings. Once you have given your consent, the third-party data can be loaded. For this, third-party cookies might be stored on your device. You can change these settings at any time (fingerprint icon in the bottom left corner). For further details, please see the Privacy notice.